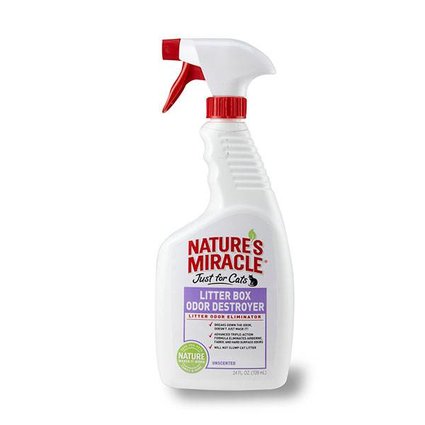 Not yet rated Add your review

Nature’s Miracle Litter Box Odor Destroyer breaks down your cat’s tough airborne, fabric, and hard surface litter box odors for a fresh, clean environment both you and your pet can enjoy. Our breakthrough formula reacts with unpleasant cat odors to break them down, on every surface—rather than simply mask odors. Nature’s Miracle Litter Box Odor Destroyer is safe to use on all litter substrates and will not cause clumping; simply spray in the litter box, in the air, clothing, or wherever your cat may go to destroy any lingering unpleasant odors. Our triple-action formula is safe to use around pets and children when used as directed and is one of few products that eliminates tough litter box odors from hard surfaces, fabric, AND the air.

For Use on Litter Box:
• Liberally spray into the litter box after cat use. Litter box does not need to be litter-free.

For Use on Hard Surface Odors:
• Lightly spray on object until slightly damp.